What are carnivorous plants?

The mighty Venus fly trap, proud pitcher plants, shy butterworts, beautiful bladderworts and the monstrous monkey cups. What do all these weird and wonderful plants have in common? Can you guess?

Well, all these plants share the trait of being carnivorous. But what are carnivorous plants? Why have they adapted this amazing skill of capturing and digesting their prey? Are they a threat to humans? Should you be scared? How do they capture their prey? Can anyone grow them?

Interested yet? In this blog I want to take a more botanical view at why carnivorous plants have inspired and captivated humans through generations. Hopefully I can provide some advice and exorcise some myths about these plants which have plagued them for years.

“The most wonderful plants in the world”. And I for one can’t help but agree with Charlie. These plants have evolved to grow in some of the planet’s most nutrient deficient soils which mean the plant has to find its food elsewhere; like a tasty bluebottle or a delectable stick insect. Bon Appetite!

What’s the difference though- isn’t a Venus fly trap the same as a sundew? Well no, they are completely different. Not all carnivorous plants capture their prey the same way. Below are the methods which different plants use, and the genera (the groups of plants) which utilise this method to capture their prey. 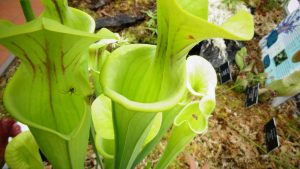 – these traps are normally part of the leaf or are modified leaves. The leaf (or part of the leaf) forms naturally in a vase shape which contains digestive enzyme juices, similar to the juices in your stomach. The victim slips on the pitchers lip or rim and falls into the abyss, downward pointing hairs keep the victim from scaling the walls and the insect drowns in the juices.

Nepenthes, Sarracenia, Darlingtonia, Cephalotus, Heliamphora   << All of these plants are in Birmingham Botanical Gardens plant collection

– leaves exude a mucus like substance which has a high viscosity (this means it’s thick and sticky) when an insect crawls over the leaves they cover themselves in this mucus which eventually sticks the insect to the leaf. Some drown in this substance others just stay stuck until they die. The leaves then absorb the nutrients from the dead insects.

Drosera, Drosophyllum, Pinguicula, Byblis, Roridula << All of these are in Birmingham Botanical Gardens plant collection 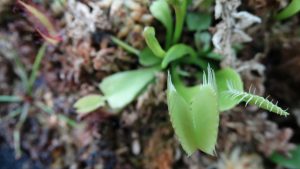 – A leaf which is modified into two or more symmetrical sides with trigger hairs inside. When these hairs are stimulated (by an insect or pencil) the two parts of the leaf close up and seal the prey inside to be digested.

– Unique to Utricularia (semi aquatic plant) these are bladder like organs (utricles) found on the roots, fully submerged underwater.  These are highly modified leaves in fact and have two trigger hairs near an opening to the flattened bladder. When a victim (normally water fleas) pass the entrance and disturbs the hairs, they cause the bladder to open and rapidly suck in nearby water and hopefully the flea. Imagine a swimming pool and someone has pulled the plug but the whole pool empties in a split second- do you think you could escape?

– Genlisea’s don’t actually have roots, instead they have modified leaves that serve the same purpose. These modified leaves also trap protozoa. The roots split and spiral around each other forming an open tunnel. When the victim enters inward, pointing hairs prevent the victim from retreating, and slowly it forces it way into a swollen part of the leaf which is the stomach.

Fun fact – There are over 600 carnivorous plant species on the planet, most of which grow in area’s which are nutrient deficit.

Where can carnivorous plants be found?

Don’t just think they all grow in the same conditions. This is also a common mistake.  It’s true the majority are found in boggy heath, however they can also be found growing epiphytically (on tree branches) in rainforests or even on rocks (as a lithophyte) in hot dry regions in Australia or fully submerged in water.

It should be mentioned that, due to poor conservation on our part, many carnivorous plants are being forced to extinction. The main cause of this is habitat destruction and illegal poaching. Some nepenthes only have habitat ranges of one part of a mountain in Borneo and they can’t be found anywhere else in the world. This means that they are very susceptible to deforestation. However this isn’t the only threat to carnivorous plants. Peat bog destruction and human colonisation have also greatly affected these weird and wonderful plants.

If you would like to learn more about carnivorous plants, please take a look at the Carnivorous Plant Society website www.thecps.org.uk/ or the following non profit website for carnivorous plant growers here: www.carnivorousplants.co.uk/

“India’s gift to humanity”: the origins and benefits of yoga

Steeped in a rich history of old Indian religion, yoga is a phenomenon with a global following. Uncover the origins and benefits of yoga here.

Birmingham citizens have voted Birmingham Botanical Gardens as one […]