Have you ever wandered through a Birmingham woodland and noticed the air sweetened by a high-pitched trill, a few branches dappled with flashes of pastel green and crimson?

If so, you may have just spied an avian beauty hidden in plain sight.

Captivating with its display of viridescent feathers, the flamboyant bird in question is the rose-ringed parakeet, the UK’s only naturalised parrot who is increasingly moving north from its south-eastern home.

Spotted as far as Glasgow, sightings of these vibrant birds have become much more prevalent in recent years. One West Midlands enthusiast photographed a parakeet on the lookout for a nest site in Solihull, just two weeks ago.

A beautiful addition to our native wildlife they may be, but where do these paradisiacal parrots derive from geographically?

Origins of the rose-ringed parakeet

Well, as lovers of tropical temperatures, rose-ringed parakeets are a vibrant abundance in many hotter countries.

Originating in parts of Asia and sub-Saharan Africa, there are thousands living across multiple countries from India and Pakistan to Senegal and Sudan.

Verdant and flourishing, the terrain in these global regions provides an ideal habitat for the parakeets to prosper in.

Delicate as they seem though, these birds adapt easily to cooler environments. 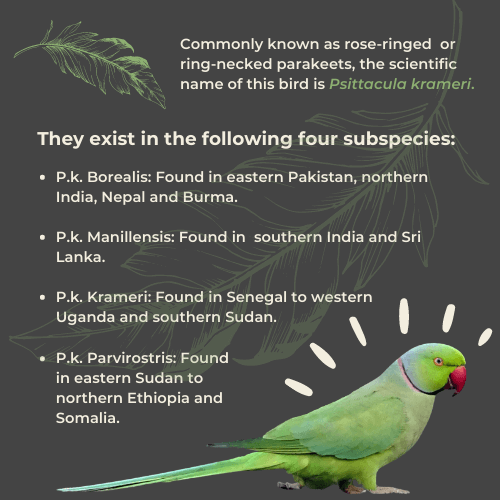 History of rose-ringed parakeets in the UK

So much so, there are 8,600 breeding pairs here! Pretty good going considering rose-ringed parakeets only began breeding continuously in the UK in 1969.

However, contrary to common myth, neither Jimi Hendrix nor Katherine Hepburn had a part to play in today’s parakeet population.

Instead, it is likely the original descendants were released or escaped from captivity.

Where to find rose-ringed parakeets?

Albeit a fairly uncommon spot in northern areas, rose-ringed parakeets do enjoy the occasional visit to domestic bird tables and feeders, especially around colder times of the year.

Nuts, berries, seeds, and grains are excellent snack offerings for these colourful creatures.

Outside of a domestic setting, parakeets can be seen in suburban parks, orchards, and large gardens where food supplies and nesting options are plentiful.

Relatively unmistakable, they possess a bright red beak, a vibrant green plumage, long tail feathers and a notable black and rose ring encircling their neck. A sight to behold amidst everyday Birmingham.

So, if you find yourself with some spare time, do come on down to the Botanical Gardens, and take a closer look into our beautiful plants and trees.

This beguiling bird could be waiting for you.