Beneath their notoriously prickly exterior, cacti are an archaic collective of plants which we have enjoyed the presence of at the Gardens for nearly 50 years.

Following their plant-collecting trip to Mexico and South America in 1958, Professor J.G. Hawkes and Dr Richard Lester returned with a selection of cacti plants and seeds which they introduced to the Gardens.

In her book, An oasis of delight: The History of the Birmingham Botanical Gardens, Phillada Ballard revealed that a new display area for cacti and succulents was then fashioned in 1963, complete with a painted backdrop of a desert landscape that was inspired by the interior design of the Sherman Hoyt Cactus House at Kew Gardens.

Since then, we have also kept up a tradition of temporarily rehoming our cacti in a semi-circular bed on the Loudon Terrace, allowing them to thrive in the warmer weather.

Funky, feisty and fruitful, cacti are intriguing plants that leave more than a pinprick when you learn these interesting facts about them. 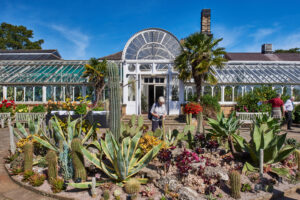 Cacti are as old as dinosaurs

Although the exact date of when cacti sprouted will probably never be known, it is estimated that they emerged during the Cretaceous period, up to 110 million years ago.

In Park S. Nobel’s text, Cacti: Biology and Uses, it is indicated that cacti evolved shortly after the supercontinent Gondwana segmented into smaller continents which included the cacti homeland of South America.

In a similar vein, the exact plants that cacti evolved from remain a mystery although some have speculated scrubby trees or the Portulaca and Talinum plant families.

Cactus is a Greek word

The word cactus is commonly believed to have derived from the Greek word κάκτος or káktos, a term used by the philosopher Theophrastus to describe a prickly plant.

According to D. Gledhill’s The Names of Plants, this plant is an unknown specimen from the Old World.

However, other sources have suggested that the spiky character in question could have been an artichoke or cardoon – aka the artichoke thistle.

During the Aztec Empire, the Mexica people believed in a prophecy given by their sun and war god, Huitzilopochtli that told them to settle where they saw an eagle eating a serpent atop a cactus.

According to The Oxford History of Mexico, the Mexica eventually settled on a rattle-snake infested island that is speculated to have been named “place next to the prickly pear cactus” which has been roughly translated as Mexico-Tenochtitlan.

This legend trickled through history and is now embodied in the Mexican flag which displays an eagle devouring a snake over a nopal (prickly pear) cactus.

Cacti have been recorded to grow to a knee-buckling height of 23.8m – that’s the same as five and a half double decker buses stacked on top of each other.

Pachycereus pringlei, aka the Mexican cardon, took the top spot for the loftiest cacti in 1986 after it blew over during a storm.

A genus of the perennial cacti, columnar, Pachycereus has approximately 20 subspecies all of which possess a large thermal inertia and are tall and tree-like in stature, revealed Michael A. Mares in his text, Encyclopaedia of Deserts. 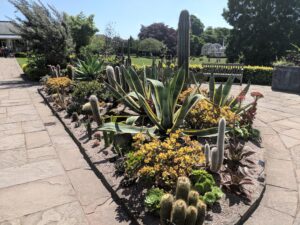 Due to their inhabitancy of dry, arid environments, cacti have cleverly adapted a way of producing food which limits the amount of water they lose in the process.

Unlike other plants which absorb carbon dioxide through their pores during the day and use light energy to convert it into food, cacti collect CO2 at night when the temperature is lower to minimise water loss.

Once the daylight returns, cacti use the light energy to convert their stored CO2 into food.

Cacti have a medicinal use

For centuries, the fruit, cladodes and flowers of cacti have been used to heal wounds and cure diseases.

Used in traditional medicines, cacti have been linked to treatments for ulcers, glaucoma, liver diseases, wounds, fatigue and dyspnoea.

More recent research of the prickly pear fruit from nopal cacti has shown this could be due to the presence of antioxidant properties, minerals, vitamins and fibre found in the plant.

If you fancy taking a closer look at these spiky specimens, a selection of our cacti plants are still available to view on the Terrace.

Book your ticket to the Gardens today to witness their splendour before summer is over.

From Tuvalu pigeon pea flowers to Samoan ginger roots, explore the national plants of the Commonwealth Games’ nations at the Gardens.

Unlimited entry to 12 gardens across the UK from £45