“India’s gift to humanity”: the origins and benefits of yoga

Today marks the eighth International Yoga Day, an annual date set up by the United Nations in recognition of the practice’s global appeal.

Celebrating the worldwide event in the Indian city of Mysuru, the nation’s prime minister, Narendra Damodardas Modi described yoga as “India’s gift to humanity” and a “holistic approach to health and well-being, balancing mind, body and soul.”

Practised by an astonishing 300 million people globally, yoga is an exercise through which one can stabilise the mind and achieve eternal peace thereafter, said Dr Manmath Gharote in BBC Radio 4’s 2016 programme The Secret History of Yoga.

Throughout July, the Gardens will continue providing yoga sessions for participants of all abilities, from beginners to yogi enthusiasts.

These classes are well worth your time; yoga is a fascinating practice to immerse yourself in, steeped in a rich history and accompanied by ample health and wellbeing benefits.

Intrigued to know more? Scroll down for the origins and benefits of yoga.

Evidence of yoga existing or being practised is sparse and pretty much non-existent before 500 BCE.

In their publication, Roots of Yoga, senior lecturer James Mallinson and senior research fellow Mark Singleton, stress the lack of documentation in ancient South Asian texts or archaeological sources which denote the “systematic, psychophysical techniques of the type which the word ‘yoga’ subsequently came to denote.”

Instead, Mallinson and Singleton state that one of the first mentions of yoga is as a “visionary meditation” within the ancient Indian Sanskrit text, Rigveda.

Born from the archaic religion, Vedism, Rigveda contains a literary piece called The Kesin hymn of the Rigveda which is considered to include the first reference of yogis. 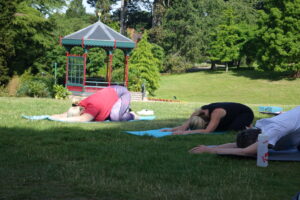 The hymn focuses on an ascetic wanderer (hermit) named Muni who, according to religious scholar and philosopher Karel Werner, can be viewed as an accomplished yogi of Vedic times through his extraordinary powers and deep spiritual experience.

Although perhaps rooted in religious scripture and belief, yoga itself is not a religion and rather a way of life.

According to Daniel Simpson in his text, The Truth of Yoga, the word yoga derives from the Sanskrit word ‘yuj’, a root word which means the joining of things together.

Early outsider sightings of yoga include the army of Alexander the Great during his invasion of India around the time of 327 BCE.

Simpson wrote that Alexander’s soldiers witnessed fifteen or so men standing, sitting or lying in different postures which have been interpreted as yoga.

Well over two thousand years later, this ancient practice has become an international phenomenon with millions of devotees in many tens of nations.

But why has this Indian practice become so popular?

Yoga is a practice which endeavours to connect and harmonise the mind, body and soul and therefore unsurprisingly brings a multitude of health and wellbeing benefits with it.

In one study, Cramer et al. found that both complex and breath-based yoga proved effective methods for bettering exercise capacity and improved shortness of breath (dyspnea).

Without further ado, take a look at some of the other rewards you can obtain from those asanas (yoga postures).

Whether it’s via the production of internal peace or the sense of community and socialisation provided in classes, yoga can be a great way to keep symptoms of stress, anxiety and depression at bay.

In a critical analysis of yoga interventions undertaken to reduce symptoms of depression, Bridges et al. found that the practice was effective in decreasing depressive symptoms in:

To ease yourself into yoga, try a few mindfulness or breathing exercises before jumping into  a downward dog and expecting great results straight away.

If you desire a strength-training regime that you can do anywhere, at any time and does not require the same degree of motivation as four intense gym sessions a week, then yoga is definitely for you.

Helping to reinforce and build up muscle mass and core strength, yoga postures are great for targeting a range of muscle groups from your neck and shoulders right down to your calves, ankles and feet.

Improving your muscular strength is so much easier when you only require one piece of equipment too!

Whilst on the subject of fitness, it is good to mention that yoga is excellent for getting your blood pumping and keeping your heart ship shape.

In a study by Telles et al., 94.5 percent of 2,963 participants reported feeling the benefits from yoga practice with approximately 30 percent remarking upon their improved physical fitness.

The same proportion of participants also recalled having improved cognitive function and a more positive mental state following the exercise, demonstrating the power of this practice.

Trying to maintain a healthy weight that is right for your body shape can be tricky particularly with a barrage of diet fads and exercise regimes appearing on your social media feeds or online searches.

With many variations and techniques, yoga is an exercise which is accessible for everyone and will help people of all fitness levels, ages and weights to achieve their goals safely and healthily.

Harvard Health revealed research that suggested people could reduce the weight they may put on during middle adulthood by practising yoga for 30 minutes, once a week for four years. How about that!

The added beauty of yoga is that the positive effects it has upon mental health can generate a better attitude towards healthy eating and body image so individuals do not feel they have failed or are unable to achieve what society deems to be the perfect body.

Having a calm awareness and connection to your surroundings and yourself is so much easier said than done.

Yet yoga is a great opportunity to develop this type of mindset and will improve the more times you undertake the practice.

Yoga at the gardens

If you would like to try out some yoga or work on the skills you already have in the tranquil setting of our gardens please click here to find out more and how to book upcoming sessions. 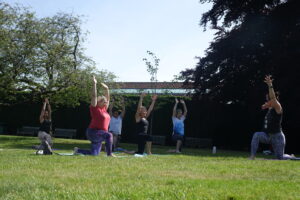 Birmingham citizens have voted Birmingham Botanical Gardens as one […]

One man’s rubbish: 7 household waste items to reuse in your garden

Discover how you can help the planet and reduce carbon emissions by reusing these 7 household waste items in your garden.

Unlimited entry to 12 gardens across the UK from £45