The Terrace is named after JC Loudon, designer of the Garden and is one of the warmest places in the Gardens.

Close to the Pavilion is a golden rain tree, Koelreuteria paniculata from China which has large panicles (stems) of golden yellow flowers in July and August, followed by conspicuous bladder like fruits. Further along the terrace is a young Betula costata, an uncommon and beautiful species of white stemmed birch, planted on 30th April 1988 by Queen Elizabeth, the Queen Mother, to commemorate her visit on completion of a major redevelopment, of the Front Entrance.

In summer months the semi-circular bed on the terrace is planted out with a stunning display of cacti and succulents. They are however rehomed in the late autumn as even though they could cope with the winter temperatures they could not survive the winter rain. So for the winter they are lifted and rehoused in the Butterfly House, along with any other plants that are too tender to stay outside. 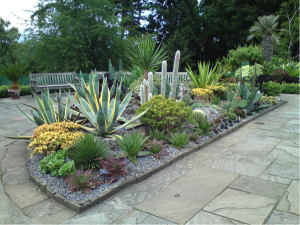 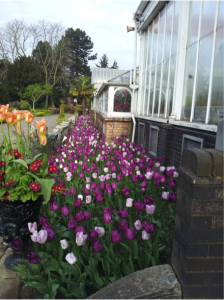